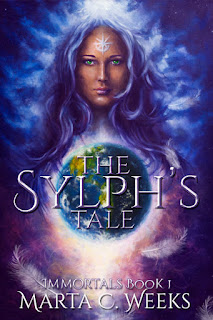 I pray for peace and goodwill to all and sincerely wish you and your loved ones a blessed Holiday Season.

As a gift from me to you here are the first three chapters of The Sylph's Tale, book one of Immortals- the series.

Warning: This story contains sexual elements that might not sit well with the average reader.
Copyrightã2017 by Marta C Weeks

I shouldn't have returned to Earth after, like a salamander, I slid into a river between a man and a virgin. Her screams and his grunts stirred in me new thoughts: What must it be to feel flesh on bones? The idea jolted me back to the sky.
~~~
To explain how it all came to be is like trying to hold time still as it expands and contracts. Every culture and experience intermingles with the reality and fantasy of what is and is not. Every living thing comes to be with memories of how it was before and was not.
Eons before the present, or what I now call the First Age, The Almighty released multitudes of Celestials, supernatural and timeless spirits to witness the diverse processes of Earth’s evolution. A hallmark of angel hierarchy is brilliance. I, Archangel of Light, was the brightest of all spirits. We all are invisible and eternal, can take on the form of seraphs, winged heavenly messengers or any living creature, but we are not glorified human beings. Not male or female and cannot reproduce as humankind does.
From times unknown, we witnessed oceans recede giving way to land. Energy flowed and chaos became order. Random matter transformed, leaving mere traces of what had preceded. Surviving matter continued the reproductive processes.
Overcome with reverence and wonder we watched The Almighty impart humans with ethereal substance: a soul, self-awareness, reason, and autonomy. Humanity rose in splendor and fell many times. In each era, from primitive beginnings, humans evolved in a manner, unlike any other living thing. Yoked with passions, humans strove for selfhood and lived, truly lived, to love, to work, to create, to war, and to ruin. They engorged the Tree of Life with pleasure and pain, sensations not experienced by Celestials.
In this First Age, in spirit, I roamed Earth. Stopped caring how other celestials reacted to mankind’s use of The Almighty's gifts. Humans enthralled me. Like a shadow or a breeze, I mingled amongst people in the throes of passions and struggles for survival. I became bored with the heavenly and consumed with human endeavors. Under the pretext of angelic observation, I watched men and women copulate, spellbound by all its aspects.
It was not long after I slid as a salamander in a shallow river between a man and a virgin that for the first time a thought came in as a whisper as if to nudge me to do, to be, to become-how must it feel to be a human. It jolted me like thunder, and I fled to Heaven's Gate, to the protection of The Almighty’s Eternal City, but I did not enter. Like a thief, I held onto my thought. Not wanting to have what I had experienced taken from me. I remained outside.
"Why did I think that? Did I feel envy?" I asked, in the safety of heaven’s harbor.
I cannot deny I was harvesting sparks of jealousy. However, I continued to veil a growing desire for humanity with the argument: Celestials have no judgment. We can empathize with humans, and sway events by inspiring ideas within them, but we do not feel. Yet, like a squirrel running from a hawk's shadow, I felt the heart of fear.
Not daring to enter the Eternal City, I pleaded to The Almighty Vision, “In You, I take refuge. Deliver me from illusions. I beg to appear before You. I want to serve You. Have I offended You? Almighty, am I envious? I long to see You.” For the first time ever, I was not summoned. No one came from behind the eternal gates.
“Have my thoughts offended You? Please do not deny me Your presence. Please do not forsake me.”
How can I, an Angel of Light, feel forsaken? I am of The Divine. “If I have wronged You by enjoying Your miracles in the land of the living, forgive me, but please do not forsake me!”
Silence enveloped me with emptiness.
For centuries, I did not return to Earth but hid in a black hole. Although celestials do not feel, best I can explain it is that I violated Holy Creeds and that realization exploded in me engulfed me in defeat, and, shriveling with loss, I vowed, defying my purpose, never to return to earth. But, I already was linked to human feelings.
The Almighty remained silent, not because I, the Archangel of Light, was created free of error, but because The Almighty had abandoned me to my own choices, my own will.
Millennia passed until a command came, "Abandon your exile. Look down to earth. Your fate awaits. Have faith, for I give you the world."
Hearing The Almighty’s voice, I whimpered, “Is this Your command? Finally, You speak to me. How can I serve You? Have mercy on me.”
Countless Celestials cried out, “Have you lost all faith?”
“Why me?” I screamed. “Why? Am I doomed, an outcast? What will become of me?”
“Why not you?” The response froze in me.
“Go, enjoy the land of the living. Now your function is to prepare the way for the Celestials of the World. You are the most brilliant Angel, one of the few that can enter The Eternal City.”
Is the human ego rising inside of me, taking over, saying what I want to hear? “If it’s not Your will, Almighty, please stop me, now,” I said.
“You are chosen to glorify creation,” the wind screamed across the sky as it pushed me into the clouds. “You must do as The Almighty demands."
“But my mandate is to witness without intervening.”

When I returned to earth, after flying in delight, I came to the summit of a mountain ten thousand feet above a canyon. The hill I now claim as my cliff.
From there I feasted on the spectacle of massive mountains, blackened by lava that rose over boulders formed by eruptions. Meltwater thundered over rocky ravines to the ocean, where blueprints of life lapped ashore in foaming waves.
Across three or four miles further was a small hill. Midway down, under terraced overhangs of colored volcanic rhyolite, tuff, and basalt, like large pigeonholes, around the entrance to caves and in the valley below were people. Tall, muscular and energetic, most with black or brownish hair, and dark to a light copper toned skin. Women wore short sleeve tunics from collar to knee and braids, coiled around the back of the neck or on top of the head. Male’s tunics were sleeveless and tied at the waist with a string, hair gathered at the back. Children wore half tunics.
Everyone but children had marks. Males had markings of hunting weapons and animals. Three men, with gray thinning hair, eyes glazed over and skin wrinkled, had marks on fingers. The women's tattoos were cross-shaped. Young women with a newborn in a sack tied to their waist and chest had one marking as if showing one child.
Days were long and sunny. Under shade, women made clothing from strips of fibers and bark, carved wood, bone, and rocks into utensils, and tended root crops. Males cleared land, tended animals, made tools and weapons. From a river that crossed over the valley at the end of the cliffs women and children caught fish with nets and men used spears made of wood with bone tips.
Women and children had private bathing sites behind a crop of bushes and everyone bathed each day before the sun disappeared behind the cliffs.
On one full moon, in front of a large cave at the center of it all, men sat around the fire. They played flutes made from bird bones and beat on drums made of animal skins stretched tight over hollowed wood or gourds of different sizes. Women cooked, served food and fermented beverages, with sad, downcast eyes and slow movements. Children took care of babies; despite the merriment, there was a whine of fear in their voices.
Silence fell over everything as three women with the most tattoos and saddest eyes forced out three girls from a cavern with the narrowest opening. Covered only by a pelt from waistline to mid-thigh, eyes with fear of caged lambs, downcast faces. Curvy bodies showed they had come to childbearing age.
Virgins of caves, I realized.
They danced to what started as a soft, slow melody of flutes. Flowers crowning unbraided hair. Moonglow and firelight reflected rays of gold and reddish waves on locks that spilled over their backs and sides, barely hiding budding breasts. Eyes lined in black and crimson painted lips as if to conceal the innocence of adolescent bodies unmarked by tattoos.
When drums joined, the tone grew heavier and faster. Tears leaked from the girl's in black streaks. When the music paused, the three oldest men took them into the large cave
Did I want to intervene? YES. I wanted to set them on flames. As if my existence depended on this moment, I craved to swoop the maidens away and kill the old men.
Others waited in sullen silence. Food and drink service stopped. Mothers clung to offspring. Males made a circle and talked around three young men.
At daybreak, as the sun crept into the heaven in a fiery blast of red, the elders brought out the girls, bedraggled and weeping, pushed them towards three young men, gesturing to grow their bellies and make lots of babies.
Months later, as torrential rains threatened to engulf everything, the entire clan rushed to harvest all that grew. Males gathered the animals and sheltered in pens below the caves. Before snow blanketed the whole valley floor, and men put rocks over the openings, women took refuge in the large cave. Just before the men followed, a girl child ran outdoors.
I stared at the little one. She was peering up at me. She can't possibly see me I thought. I have not taken a mortal form of any kind. Yet, she stares at me. Her eyes are open wide as if to show me the forests of the earth in her green pupils. She waves at me with a tiny hand, a smile fills her face before her mother looks up and takes her into the big cavern.
As the hole got covered from the inside, my wings spread, prepared for flight, but the sound of a waterfall and chirping of birds in a marsh, below the underside of the cliff, caught my attention.