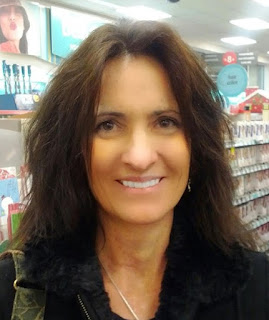 In Gallimore's debut novel WANTED the reader can "ride the traills of imagination" with her main character Caitlyn Daniels who "didn’t plan to fall in love, least of all with an outlaw. Life was too exciting to waste it on domesticities. However, when Dakota Cabe rode into town, she lost her heart to him."

My questions and Caren's answers:

Caren when did you first consider yourself a writer?
At the age of ten when my best friend and I created our cat magazine.

Do you have a specific writing style?
I’m a pantser. I relate my writing process to conversing with a dear friend who calls out of the blue and says, “Guess what happened?” She tells me, and I’m flabbergasted by her news.
It’s the same with my characters, I write down their news and in the process discover what all happened. The preceding event that led up to the calamity is as exciting as their plans to resolve it. I find out even more about my characters and how their experiences came to be. From there I just follow them around. Sometimes one of my characters does something so out of place and contradictory to what I expect, I’m stunned. Regardless, I write it down and eventually it all makes sense.

How did you come up with the title?
My first choice was Leather and Lace, but the title was already taken. Wanted was the next logical choice because of my main male character’s unfortunate bounty on his head and my heroine desire for the man under the rough veneer. I assumed the publisher would change the title so I always considered it my working title. They didn’t change it and that is what it is printed under. Gasp.
I didn’t realize how many Wanted titles there were or their distinctions. 😊

Is there a message in your novel you want readers to grasp?
As hokey as this sounds, love is stronger than any devil you may encounter, and faith in your loved one when circumstances contradict can make that commitment even stronger. And, need I say, women are tough.

Is there anything you find particularly challenging in your writing?
Finding uninterrupted time to write. I am not a person that can write wherever. Again, I relate it back to an intense conversation with a friend. You don’t want to put her on hold or have other people eavesdropping on you. You want to sit down and listen intently.

What was the hardest part of writing your book?
Not to get overly involved with my characters and interfering with their decisions. And, also uninterrupted time, especially for edits. I certainly don't expect life to pause while I’m writing, but I find it challenging to do edits if I have conflicting interests.
Do you recall how your interest in writing originated?
From a very early age, I loved to draw and always had a little story to go with the drawing. My spelling was atrocious, but what can you expect at the age of five?

Did you learn anything from writing your book and what was it?
It’s not so much about being a writer as it is to write the story. I think everyone has a story to tell but it needs to be on paper so others can read it?

Do you have any advice for other writers?
Just write. Never stop to edit until you are done. Write even if you have nothing to say. When I’m stumped in my writing, I write about that, and I also write the reason why. Such as: Where am I going with this? This conflicts with my character's background. Why does it? Why would she act so out of character? Did I miss something? It’s incredible what I discover just by writing my thoughts. I ask myself questions and write down the answers. Why would she say that? What did he feel when she said that? I also write scenes in reverse switching characters, and change the POV to get to the core of the scene.

Do you have anything specific you want to say to your readers?
Thank you for reading my work. I put my heart into it and hope it was all you expected it to be. Please let me know your thoughts.

Are experiences based on someone you know or events in your own life?
When I was a preteen, I camped with the girl scouts at a pony express station in Utah that no longer exists. That experience has stayed with me my entire life. I fell in love with the west and the ruggedness of the people that lived there.

Please share some pointers about the storyline.
Wanted is a love story set in 1885 in a fictional town in Colorado. The two main characters are Dakota Cabe and Kaitlin Daniels. The story starts out in Bisweak Colorado where the two meet.
This is from my back cover which I hope tells you about the storyline:
Caitlyn Daniels didn’t plan to fall in love, least of all with an outlaw. Life was too exciting to waste it on domesticities.
However, when Dakota Cabe rode into town, she lost her heart to him. His reputation, which left most women in need of smelling salts, didn’t deter her; she saw the man beneath the tough façade of a hard-hearted desperado. When the sheriff forced him out of town, she was devastated. She understood his reasons to protect her from bounty hunters, but she’d rather live on the run than without him. But he didn’t ask, and she didn’t tell him she was pregnant. Her pride wouldn’t allow her.
Eighteen months later, John Wakefield, a vindictive outlaw, kidnaps her son and her friend. Her pride was meaningless. She’d make a deal with the devil if that could change things.
Alone, but not without skills of her own, she rides out after John Wakefield and his gang.
In her desperate pursuit to rescue her son, she collides with Dakota, surprisingly on the same mission. She needs a man as cold, brutal, and cunning as the man who has her son; she needs Dakota Cabe. And she wasn’t too proud to beg if necessary, but she didn’t have to.
Former lovers, now daring desperados they put their past aside to save their son. Together they confront vicious outlaws; friends turned enemies and an unruly love neither of them can deny nor control.

Can you share a little of your current work with us?
ANOTHER TIME will be a 95,000-word time-travel romance set in the wild west and the present.
Synopsis: A simple incident of being in the wrong place at the wrong time propels Jessalyn McQuire back 100 years into a time of vigilante justice, half-breed cowboys and high-test horses. At first, Jess is pleasantly amused by the shenanigans of this overdone John Wayne reenactment, but as time goes on, and real bullets start to fly, humor turns into the mother of all headaches.
Devon Slade is baffled by the woman he finds alone, without a horse, (although she claimed to have had a car), dressed in men's clothing, black goo running down her face in a ghoulish manner, with no weapons and in need of assistance. Being graced with this problem when he was in the middle of making haste doesn’t endear her to him.
Chased by outlaws, attacked, robbed and nearly hung does little to entice Jess to stay in the Wild West. What she truly wants is a first class ticket back home and a chilled martini.
But, there is one little hitch to her quest to get back home; obnoxious as the man was, he had proven to be more dependable, more capable and more genuine than any man she had ever met.
If she could find her way home, would she really want to go? 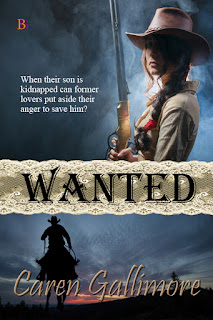 www.goodreads.com/.../show/18464921.Caren_Gallimore
“Ride the trails of Imagination”